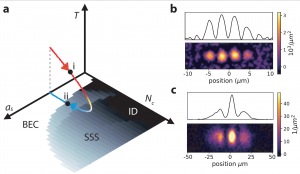 In the short time since the first observation of supersolid states of ultracold dipolar atoms, substantial progress has been made in understanding the zero-temperature phase diagram and low-energy excitations of these systems. Less is known, however, about their finite-temperature properties, particularly relevant for supersolids formed by cooling through direct evaporation.

In this new experimental work, we explore this realm by characterizing the evaporative formation and subsequent decay of a dipolar supersolid by combining high-resolution in-trap imaging with time-of-flight observables.  As our atomic system cools towards quantum degeneracy, it first undergoes a transition from thermal gas to a crystalline state with the appearance of periodic density modulation.  This is followed by a transition to a supersolid state with the emergence of long-range phase coherence. Further, we explore the role of temperature in the development of the modulated state.