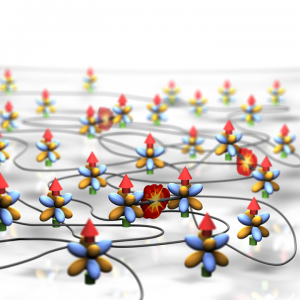 We have studied the scattering behavior of ultracold Er atoms and observed an enormous number of Fano-Feshbach scattering resonances and demonstrate high correlation in the spectra, underlying chaotic scattering between the particles. This work, now published in NATURE,  is a joint effort between our group, John L. Bohn from JILA (Boulder, Colorado),  and the team of Svetlana Kotochigova at Temple University (USA). Nice media coverage (in italian) from the MEDIA INAF. [more] 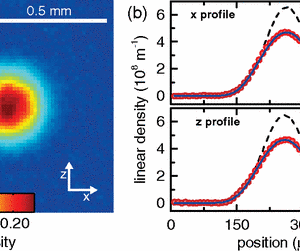 We have measured and analyzed the hyperfine structure of two lines, one at 583 nm and one at 401 nm, of the only stable fermionic isotope of atomic erbium as well as determined its isotope shift relative to the four most-abundant bosonic isotopes. Our work focuses on the J→J+1 laser cooling transitions from the [Xe]4f126s2(3H6) ground state to two levels of the excited [Xe]4f126s6p configuration, which are of major interest for experiments on quantum degenerate dipolar Fermi gases. From a fit to the observed spectra of the strong optical transition at 401 nm we find that the magnetic dipole and electric quadrupole hyperfine constants for the excited state are Ae/h=−100.1(3)MHz and Be/h=−3079(30)MHz, respectively. The hyperfine spectrum of the narrow transition at 583 nm, was previously observed and accurate Ae and Be coefficients are available. A simulated spectrum based on these coefficients agrees well with our measurements. We have also determined the hyperfine constants using relativistic configuration-interaction ab initio calculations. The agreement between the ab initio and fitted data for the ground state is better than 0.1%, while for the two excited states the agreement is 1% and 11% for the Ae and Be constants, respectively.[more] 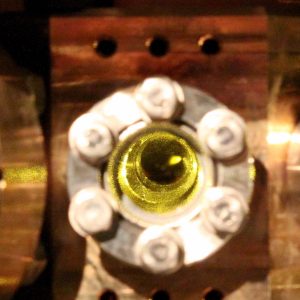 We report on the experimental realization of a robust and efficient magneto-optical trap for erbium atoms, based on a narrow cooling transition at 583 nm. We observe up to N=2×10^8 atoms at a temperature of about T=15 μK. This simple scheme provides better starting conditions for direct loading of dipole traps as compared to approaches based on the strong cooling transition alone, or on a combination of a strong and a narrow kHz transition. Our results on Er point to a general, simple, and efficient approach to laser cool samples of other lanthanide atoms (Ho, Dy, and Tm) for the production of quantum-degenerate samples.[more] 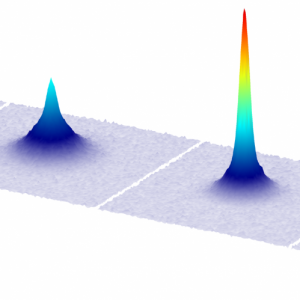 We report on the achievement of Bose-Einstein condensation of erbium atoms and on the observation of magnetic Feshbach resonances at low magnetic fields. By means of evaporative cooling in an optical dipole trap, we produce pure condensates of Er168, containing up to 7×104 atoms. Feshbach spectroscopy reveals an extraordinary rich loss spectrum with six loss resonances already in a narrow magnetic-field range up to 3 G. Finally, we demonstrate the application of a low-field Feshbach resonance to produce a tunable dipolar Bose-Einstein condensate and we observe its characteristic d-wave collapse. [more]