News from the labs
Hyperfine structure of laser-cooling transitions in fermionic erbium-167
We have measured and analyzed the hyperfine structure of two lines, one at 583 nm and one at 401 nm, of the only stable fermionic isotope of atomic erbium as well as determined its isotope shift relative to the four most-abundant bosonic isotopes. Our work focuses on the J→J+1 laser
Keep Reading ...
Narrow-line magneto-optical trap for erbium
We report on the experimental realization of a robust and efficient magneto-optical trap for erbium atoms, based on a narrow cooling transition at 583 nm. We observe up to N=2×10^8 atoms at a temperature of about T=15 μK. This simple scheme provides better starting conditions for direct loading of dipole
Keep Reading ...
« Previous 1 … 11 12 13
Group news
Erwin-Schrödiger-Prize Awarded to Francesca 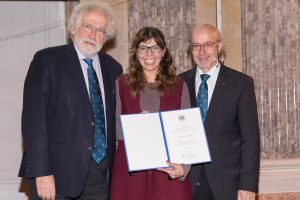 Francesca recieved the Erwin-Schrödiger-Prize from the Austrian Academy of Science (ÖAW)! This annual award is the most prestigeous ÖAW prize for mathematical and natural science and it is given to exceptional researchers working in Austria. Next to Prof. Peter Zoller (1998) and Prof. Rainer Blatt (2006), the award is now
Keep Reading ...
Feltrinelli Prize Awarded to Francesca Ferlaino 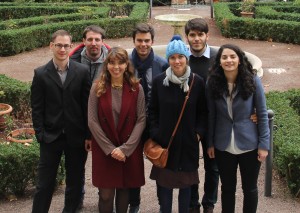 This week quantum physicist Francesca Ferlaino will receive the Antonio Feltrinelli Giovani Prize in physics. This is the first time the prize, valued at 50,000 Euro, will be awarded to young scientists. It recognizes the achievements of Italian scholars under the age of 40 who have achieved results of outstanding
Keep Reading ...
Claudia and Gabriele are Master of Science! 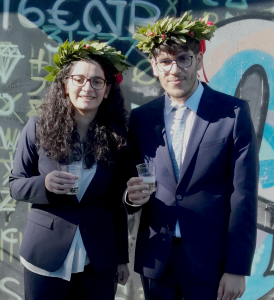 Claudia and Gabriele succesfully defended their master theses in Pisa and recieved their master's degrees from the University of Pisa. Congratulations to both of you and enjoy your vacation, before you two will start again in our group in January!
Keep Reading ...
« Previous 1 … 11 12 13 14 15 … 22 Next »
Welcome and goodbye
No post found